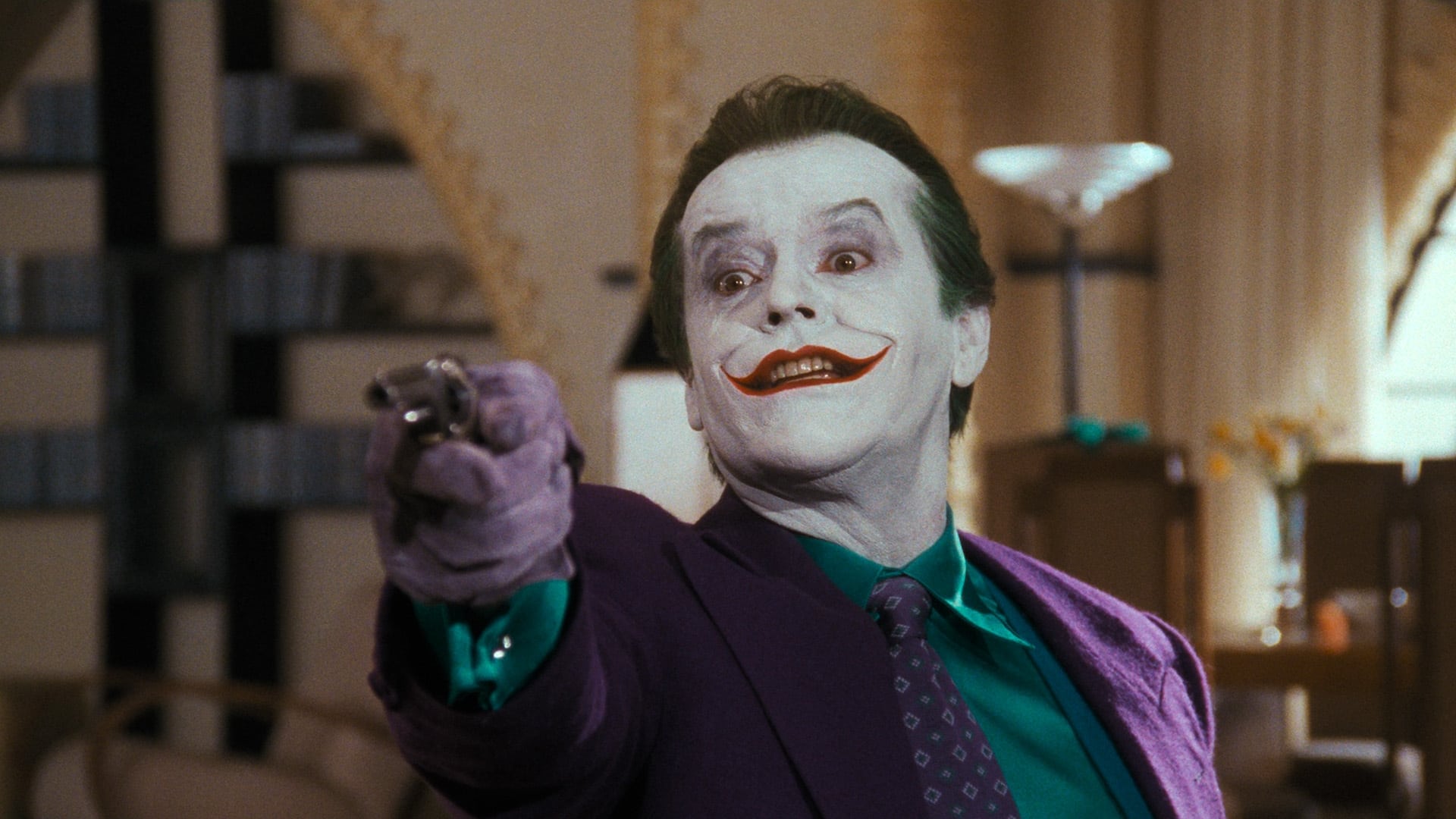 The original Tim Burton Batman from 1989 lives in my head canon as one of my favourite films of all time; although I would be hesitant to say it was top ten or even top twenty material, it’s fair to say it’s on my list of most viewed movies. So when was the last time I actually sat down to watch this? I draw a complete blank, throw the dart, and it lands in the murky depths of the early 2000s. It was an afternoon in the summer of 2002′ after finishing for the day from a summer job, I found myself with a fresh paycheck and the entitlement to feed my movie collection. Batman and Batman Returns were my targets and pickups that day from one of the local media shops, and I would have gone home and watched at least the first one, with the second one perhaps following that weekend. A few short years later, Batman Begins would hit the scene, and those original films would take a back seat in viewing priority.

With the latest release of the original quadrilogy on UHD upon us, it was time to revisit these films and by extension, relive a 90s childhood of Batman films.

With faint certainty, the first time I saw Batman was in 1990 or even 1991, a year or so after it arrived in theatres. I have this memory of my uncle making a comment about seeing “fatman.” Being so young, I wasn’t sure if it was even a joke at the time, and I would have been too timid to either a) laugh with him, or b) correct him on the title. There is another memory I have wherein I was watching Batman (somewhat alone – I think my parents were tending to the house while I was in the living room) of watching the film on VHS and pausing in various action scenes to see how much action I could see. Or something like that, I suppose. I never claimed to be a regular kid.

Batman Returns features with great prominence; released in 1992, I have distinct memory of seeing this in the downtown theatre, and convincing my dad to purchase the oversize, glossy “official guide” to the movie in the lobby afterward. I was even fortunate enough to have a giant sized – I believe it was actually life-sized – poster of Batman himself standing in front of the Penguin’s Duckmobile. It would adorn my wall for many years and I often wonder what happened to it. In the same years Returns, we were gifted with the arrival of Batman The Animated Series on television, and my love for the character would be cemented. While my go-to comic book pickup would be Spider-Man, I did begin collecting Batman comics around this time; specifically starting with Knightfall (the series in which Bane breaks Batman’s back).

Having these movies around was quite significant; I had seen Superman, but was just never really into the character. I had also seen some incarnations of a live action Spider-Man but even as a child I knew it wasn’t “the real deal” and now with Batman, I had something to really latch onto. Burton’s Batman movies came out in my formative years and would become the benchmark to which I would hold not only future iterations of Batman to, but also superhero movies in general to. My comic reading would be influenced as well when I sought out some of the material Burton used, including The Dark Knight Returns and The Killing Joke. In fact, I found myself (and still to this day) going back to 80s Batman series as my anchor for the character.

I did approach revisiting Batman with some nerves: what if it’s been too long? What if I’ve changed? How much of my love for these movies, nearly thirty years later, were fueled by nostalgia?

Fear not: I still love these films.

It is interesting though, to see these movies now in the context of a world where superhero movies are the dominant genre in theatres everywhere. We’ve also been treated to a seriously good trilogy of Batman films from Christopher Nolan (presumably the best one being The Dark Knight, although I may prefer Batman Begins) and a smattering of Batman appearances in a fledgling, yet fascinating, DC cinematic universe (of sorts). Pop culture has evolved as well: what was perhaps too “nerdy” for regular audiences is now the norm, as we collectively embrace our inner child to fully realize an entire industry built upon nostalgia and fueled by would have been considered guilty pleasures, but is now guilt-free, accepted and encouraged fun.

With that, it’s not surprising then that Tim Burton directs Batman in the 80s; Burton – while loving The Killing Joke graphic novel – was not a fan of comic books and may seem like an odd choice to bring such a fan favourite to life on the big screen, but his creative vision and knack for incredibly imagery are incredibly fitting to bring a comic book character to an audience that may still consider the medium beneath them. The comic industry certainly helped propel this vision of Batman along, with the aforementioned Killing Joke and Miller’s famous Dark Knight Returns: readers embraced this darker version of Batman and audiences were primed for a proper adaptation.

It’s difficult to call Batman a “dark” superhero film these days, now that we’ve seen Nolan’s gritty, more grounded Dark Knight trilogy. Certainly, the film is dark so to speak, but it’s also full of vibrant style and life, anchored with a larger-than-life Joker brought to reality through Jack Nicholson’s performance. For being the title character, Michael Keaton’s Batman takes a serious backseat to the Nicholson’s Joker, but I can’t even complain that much. Keaton does a good job, and I appreciate that this is a different take on the hero: we would diver deeper in to the Wayne/Batman dual identity in later films.

There are a number of fascinating things to me here.

Both the Joker and Batman seem primarily concerned about image: the Joker is vain, surrounding himself with beauty. He’s pissed that his face is wrecked, but arguably more pissed that Batman is getting better press than he does. He pursues Vicki Vale for no other reason than to have a more beautiful woman to have on his side.

Batman’s introduction is menacing and from the point of view of the common criminal: he busts two guys who’ve just mugged some good folks, but has no interest in handing back the stolen goods. He’s there to scare these guys and to tell other’s that Batman is real, and he’s going to mess you up. Keaton’s Wayne is a kind of wide-eyed, bumbling alter ego – which is fitting as an opposite to his dual identity, but perhaps plays things a bit too cool,  so to speak, to the point where you’re not really sure if Bruce cares that much about anything at all. With that, he never sees the Joker as a true threat until he starts harassing Vicki Vale – who just so happens to be dating. When Joker laces cosmetic and grooming products, it doesn’t take Batman much effort to figure it all out and help the people out. Otherwise, Batman kind of goes out of his way to show how cool he is, and probably takes pleasure in showing off his “toys” to the Joker’s bemusement.

I can honestly say that I don’t remember a “code of conduct” wherein Batman doesn’t kill; it goes without saying (sorry I’m saying it anyway) that superheroes generally don’t though. I always believed Batman’s hard rule was no guns, which is fair, but it’s kind of expected that some of the thugs he dispatches with aren’t going to make it. In more recent media though, we seem to have a Batman that won’t kill at all, and even his brutalist methods of crippling criminals are called into question on a regular basis. Did people make a big deal that Batman straight up murders people in the 1989 film? He tries to save Jack Napier from falling into the vat of acid, sure, but he’s not too broke up about failing to do so. We have the clock tower fight between Batman and a thug mini-boss, wherein Batman flips the dude down the tower. You can’t tell me that guy survives (especially since Joker takes a similar height fall just minutes later). His vehicles are equipped with real weaponry, and yes, guns. He tries to gun down the Joker from the Batwing; look at this from Batman’s view: he flies into downtown Gotham, guns blazing, people everywhere on the street. The Batwing looks ill-equipped to land in such an environment; he’s full expecting to kill the Joker from a distance and fly home in time to catch himself on the evening news.

The modern superhero movie is full of action; Batman is not. Can you still consider this an action film? By all means, there is a decent amount of action, and I’m exaggerating here, but the point is: Batman doesn’t really move that much. He’s not pulling out advanced martial arts techniques; he’s not doing much jumping or rolling around. He’s an immovable statue, preferring to allow his enemies to come to him, and dispatching them with one well placed punch, and I have to say, I love it. It’s kind of like every fight he’s in is a call back to when Indiana Jones simply pulls out his gun on a guy showing off his sword techniques, bypassing an entire fencing battle and ending it with one bullet. That’s Batman right there, except the bullet is a strong jab. But he has all those toys right? All those gadgets that give him the upper edge, although I would say most of them are deployed to scare people and mystery to the Batman folklore. His weapon of choice is the grappling hook, allowing him to make unexpected entrances and clean escapes.

Finally, the UHD itself is beautiful. There is some controversy I couldn’t be bothered with regarding updates sounds; the image is incredible, and stands tall above the previous Bluray and DVD releases. This also marks the first time I’ve seen the film in high definition, and on a larger screen – sometimes I forget that the biggest television we had was about 27 inches until 2005/2006.

When all is said and done, I really have nothing real negative to say about the film. It ages well simply because of the abundance of style present; if anything, some usage of Prince’s songs are a tad rough, but they are unique enough that they fit into a film that already muddies the period to begin with (that is, some ’40s aesthetic with modern/retro technology and art). The city is a character upon itself; Gotham defies labels and is utterly unique; a style that would be adapted and become status quo for Gotham in the Batman Animated Series and comics later on. And I never did mention the music: Danny Elfman’s score roars to life from the title sequence and stays strong throughout the runtime; its effect on me perhaps more pronounced as I would delve into the world of movie soundtracks in later years, and in fact, the Batman score was one of the very first CDs that I ever purchased.

I have given a name to my pain, and it is Batman.