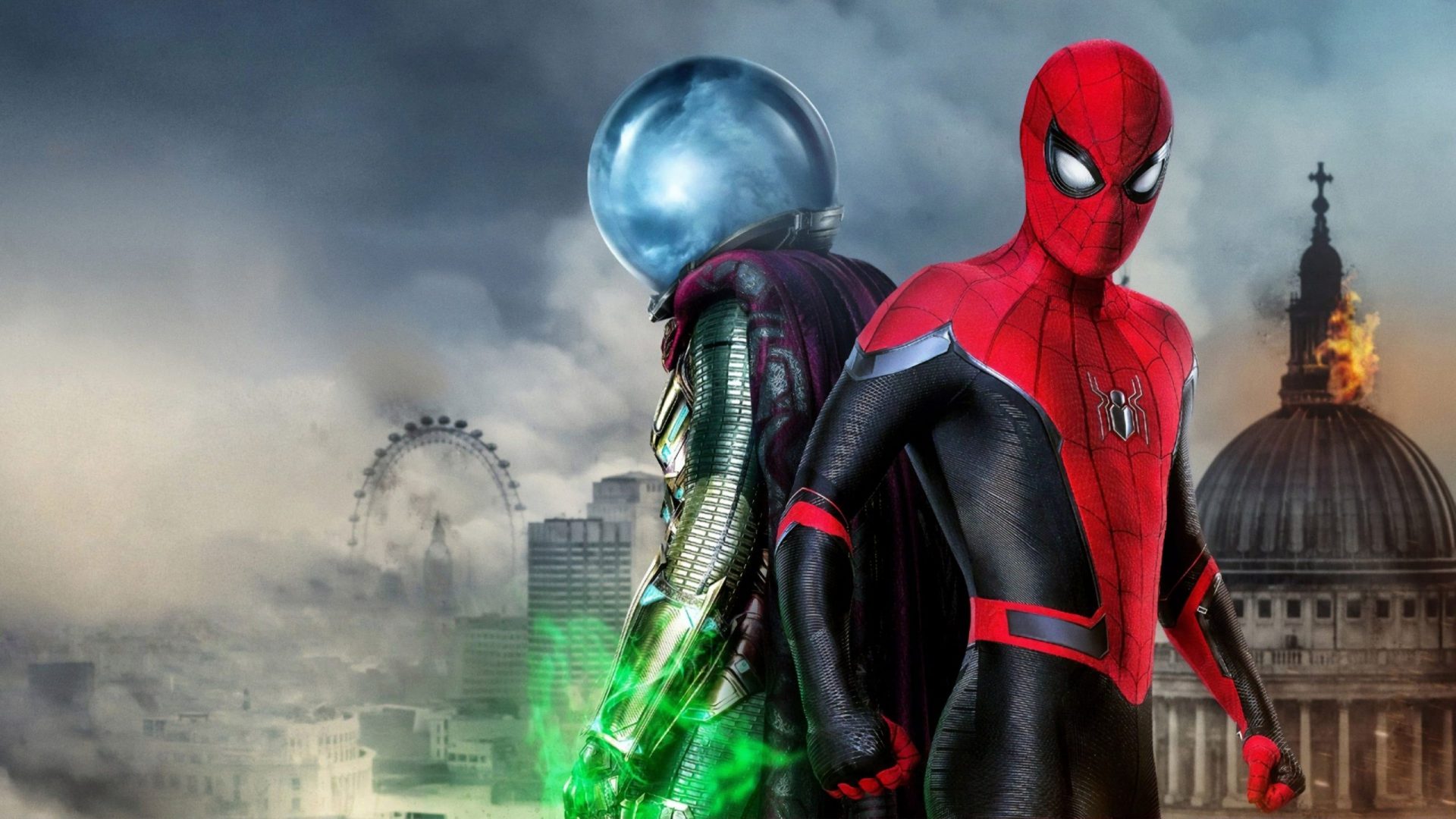 The Marvel Cinematic Universe is, by this point, a well-oiled machine that basically prints money on command. Spider-Man Far From Home, the second solo outing for Peter Parker and his alter-ego in the MCU, seemed destined to be a smash success, as most Marvel films are these days. And, of course, it is raking in a tonne of dough. There’s no question it’s a financial success for Marvel Studios and their evil overlords at Disney. It did what it was designed to do, and exactly nothing more.

I went in to Spider-Man: Far From Home as a fan of the MCU in general: a few terrible films, a few great films, a lot of solid films somewhere in between those two extremes, but always well-thought out and part of a larger plan. I remember walking out of Avengers: Infinity War and thinking that this is probably as close as I would get to experiencing a cinematic event that people watching The Empire Strikes Back for the first time in theatres must have shared. I’m impressed at the MCU’s long-form storytelling, a sort of modern reinvention of the old serial films that people like George Lucas grew up on, and I’m on board, man. I’m picking up what they’re putting down.

So of course following this classical rhetorical device of listing my franchise-appropriate geek bona fides, I will follow up with how disappointed I was with Spider-Man: Far From Home. It wasn’t terrible; it wasn’t great. It was a standard middle-of-the-road MCU film, but almost cynical in its mediocrity, as though tempting audiences to even try and let their heroes – both super and corporate – fail.

Spider-Man: Far From Home finds Peter (Tom Holland) and his classmates picking up after the events of the last couple of Avengers movies where (SPOILER) half of all life was deleted from existence then brought back five years later. Peter Parker and his class, which is entirely made up of characters from an indie comedy transposed into a Marvel film, are on a class trip to Europe when strange elemental creatures start randomly attacking cities at (*checks notes*) exactly the same geographic coordinates that Peter and his class are visiting. Mysterio (Jake Gyllenhaal)shows up to save the day, and everyone in the audience who’s ever even heard the name Spider-Man even whispered before sits around waiting for the dramatic reveal that yes, this character that’s been a villain in comics, cartoons, and video games for for more than four decades is in fact (*checks notes*)… yep, he’s… he’s still a villain.

That summary may seem kind of snarky (and it is), but again, overall I liked this movie. There were a lot of positive features about this film. The casting and acting were all great, as usual. Jake Gyllenhaal felt right at home in the MCU, as he does in most everything he’s in. Thematically, the idea of legacy with Peter feeling overshadowed by the memory of Tony Stark and his (SPOILER) sacrifice to save the universe played out well, with Jon Favreau’s Happy Hogan stepping up and filling in as something of a mentor role in contrast to Mysterio’s (obviously) false mentorship. The MCU is shaping their version of Spider-Man into something a little bit different from the comics, which is OK by me. Like what they did with the Hulk, it wasn’t the direction that I would have taken with the character, but it works within the context of the MCU and their established universe and long-form storytelling.

Spider-Man: Far From Home also features one of the best, most trippy sequences in the entire MCU. This is one of those few times I actually don’t want to spoil anything, but that first showdown between Spider-Man and Mysterio really kind of blew me away, both in terms of special effects, but also the imagery and the blocking of the whole thing. That whole scene was pretty crazy, and the movie actually made Mysterio into a credible villain (aside from a certain hamfisted villain monologue) in a way that I really hadn’t seen before.

So despite all of that good stuff,  why do I seem so lukewarm over this movie? Well, for one thing, it felt like it really dragged. I’m not one to complain often about a movie’s run time; I think that each movie should be exactly as long as it needs to be to effectively tell the story it wants to tell, so I’m pretty forgiving on that front. But one my first impressions after watching Spider-Man Far From Home was that they could have cut out at least a half an hour of content, and it would have made the narrative a lot better. I really felt like the balance between Peter Parker/Spider-Man and the cast of a quirky indie comedy that he was travelling through Europe with was way off. I understand that the supporting characters in these films are important to ground the hero and demonstrate their link to humanity, but I think one of the things that Spider-Man: Far From Home proved was that you can have too much of a good thing.

It’s not that Ned, or MJ, or their idiosyncratic teacher weren’t charming or funny, because they absolutely were. I found myself laughing a lot throughout the movie, because there were a lot of genuinely funny, charming moments. But this brings us to the second problem, which is a lack of focus in terms of both narrative and genre. I think the biggest problem with Spider-Man: Far From Home that kept it from being a lot better was that there was a real tension between two competing genres. Spider-Man: Far From Home felt like two movies struggling to tell their stories at the same time and talking over each other: the superhero action blockbuster and the indie teen comedy coming of age story. These are both great genres with a lot of narrative potential, but in the case of this film, the two genres and their respective tropes felt like they were in competition with each other rather than working harmoniously towards a common purpose.

It’s not that mashing two (or more) genres together is necessarily counterproductive or even counterintuitive. To use an example from the MCU, what I think is their best offering to date, Captain America: Winter Soldier, effectively blends the superhero and spy thriller genres. It works because both genres mesh well with the themes of the film, and the tropes from both of these genres are employed to further the plot and the characters exactly as much as they need to: no more, no less. Captain America: Winter Soldier had a laser focus in terms of its themes, plot, and characters. Spider-Man: Far From Home felt like two potentially great yet entirely different films just sort of mashed together, so I never felt completely engaged in either one.

I think where Spider-Man: Far From Home also stumbled a bit was falling prey to a classic (Marvel) blunder. Yes, they got into a land war in Asia, but also what was supposed to be a movie about Spider-Man felt overshadowed by Iron Man and, indeed, all of the Avengers, what with this being a follow-up to Avengers: Endgame, and indeed referencing the fallout from that movie quite a bit. One of the pitfalls of the long-term storytelling that the MCU employs is that each film runs the risk of not quite striking that balance between telling its own story and continuing the overarching story underlying all of the films. Spider-Man: Far From Home is a good popcorn movie and a riveting summer blockbuster, but without a whole lot of real substance. There was one throughline about Peter picking up the torch that Iron Man was carrying, which demonstrated both the calibre of actor that both Holland and Favreau are (that is to say, very high), and a thematic thread that really could have tied the film together, man.

As it is, Spider-Man: Far From Home is a great theatre-going experience, but an utterly safe film that took zero risks and was a bit too muddled in the multiple stories it was trying to tell. If you want a great popcorn flick, Spider-Man: Far From Home has you covered. If you’re looking to sink your cinematic teeth into something a little bit more substantial, well, you may want to see what else is on the menu.