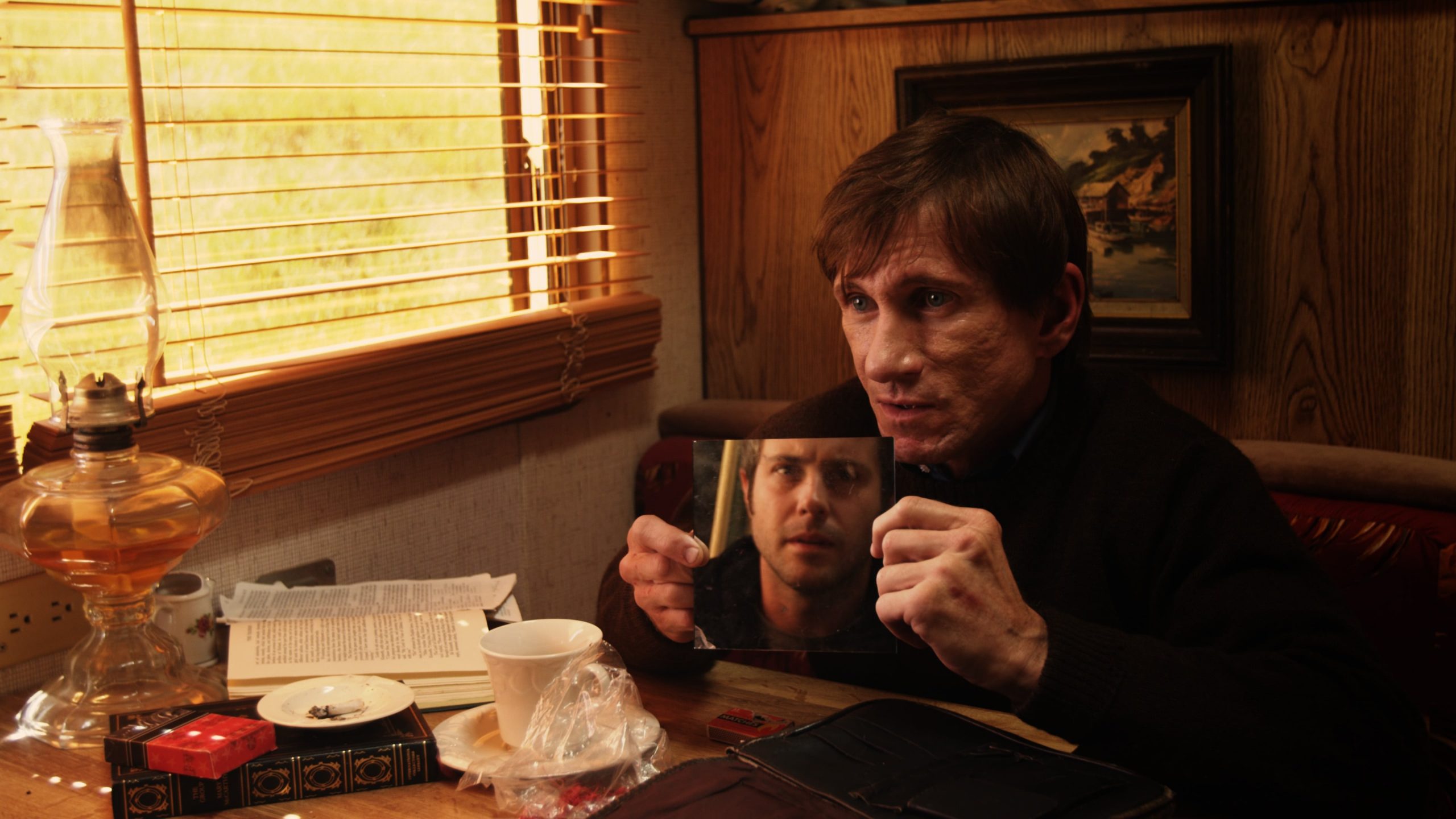 If I accomplish one thing before I die, I’d be happy just having spread the good word about the work of filmmakers Aaron Moorhead and Justin Benson, like a UFO cult member spreading the good news of the end of days. I had never heard of Resolution until recently, but what I did hear was, well, not a lot. I went into this film knowing hardly anything about it, and I have to say, I was absolutely blown away. Even though I was watching Resolution some eight years after the fact, I felt like I was back on the cutting edge of visionary filmmaking instead of caught up in the digestive tract of the the bloated mutant that is the Hollywood blockbuster; I was once again surfing the wave instead of treading water in a constantly rising tide.

As many before me have pointed out, there are some obvious similarities between Resolution and the more prolific Cabin in the Woods which came out the year before. Without getting too far into spoiler territory, both films deal with supernatural entities who can seemingly only be appeased by ritualistic, recurring human narratives. Unlike Cabin in the Woods, however, Resolution leaves much more to the imagination, most likely because of the $20,000 micro-budget, which ends up working to its benefit. The scale of Resolution is much more intimate, staying tightly focused on the trials and tribulations of two friends. Michael (Peter Cilella) is making a last-ditch effort try and help his long-time friend Chris (Vinny Curran) overcome his hardcore drug addiction with a forceful, week-long detox program that involves handcuffing him to an exposed pipe in the dilapidated cabin in which he happens to be squatting until he gets clean.

Whereas Cabin in the Woods was concerned with analyzing and deconstructing horror movie tropes, Resolution was focused on the more fundamental power of storytelling and story cycles. It’s no accident that the main storyline centres on one friend trying to help another friend kick a particularly nasty habit. Anybody who has been afflicted with addiction or substance abuse issues, or has dealt with friends or family members suffering from the same, recognizes the metaphor of cycles is an apt one for characterizing human behaviour. Addiction is not only a heartbreaking situation for all involved, it’s also often an extreme example of how patterns of human behaviour reinforce and repeat themselves.

So too with stories.

Human beings are story-telling creatures; it’s how we make sense of the world. In Resolution, when Michael and Chris slowly begin to suspect slash realize that someone or something wants them to act out a particular narrative that does not end well for them, they’re not sure exactly how to solve the problem. Not only is this the thematic embodiment of Chris’ addiction, it also represents a larger dilemma:

Who’s story are they really telling, and who are they telling it for?

It seems for a while that once they catch on to the fact that they are being manipulated into telling a very painful, violent story with themselves as the unlucky protagonists, Michael and Chris hatch a plan to break out of the cycle. Michael, as a father-to-be, is worried about the would-be author of their apparently gruesome narrative tagging along with him, and hurting his burgeoning family. Instead, the duo decide to stay and outsmart their puppet master, and though they apparently avoid fulfilling the specific gory deaths that were being set up for them, are in the end confronted face-to-face with the architect of their horror.

Chris, as he has done with his addiction, gives in, prostrating himself before a presence unseen by the audience and apologizing. Michael, as he’s done with Chris, tries to reason with the entity, asking if they can “try it another way.” Even without further expansion of Michael and Chris’ story in Moorhead and Benson’s later film Endless, it’s clear that it does not end well for them. Though the ending of Resolution is left ambiguous, it’s clear that both Chris and Michael’s approaches are failures, as they are both different types of capitulation, essentially conceding power to the entity to continue enacting and re-enacting its abhorrent cyclical narrative pattern.

It turns out that, in the end, leaving was the correct choice: in this case it didn’t represent running away, but rather taking control of one’s own narrative. Whether it’s cycles of addiction or control, or cycles of birth and self-sacrifice, our life narratives – the stories we tell about our lives, both recounted after the fact and enacted in real-time – are powerful and meaningful, and can help or harm ourselves and others. The true horror of Resolution wasn’t that a supernatural entity tried to ensnare people in its own twisted story for undoubtedly heinous ends; it’s that Michael and Chris, when confronted, willingly chose to abdicate their own agency in hopes of bartering for a better outcome.

This is a deeply unsettling thought, and why Resolution was one of the most anxiety-inducing and enjoyable cinematic experiences I’ve had in a while. It was seriously the most tense I remember being while watching a movie in a long time. Resolution is one of those rare beasts; a horror movie that doesn’t rely on cheap jump scares. It’s definitely a slow burn. The way Moorhead and Benson are able to build tension slowly over the course of the narrative without calling attention to the fact that they’re building tension is masterful, and it demonstrates absolute confidence in the story they wanted to tell. There was also an underlying respect for the audience. As the mystery unfolds, layer by precise layer, the answers aren’t spoonfed to viewers; in fact, Resolution isn’t so much concerned with providing concrete answers but in challenging the audience to interpret things for themselves. Bonus points to Moorhead and Benson for having no clear answers in a movie literally titled Resolution. (Now that’s ironic, Alanis Morissette.)