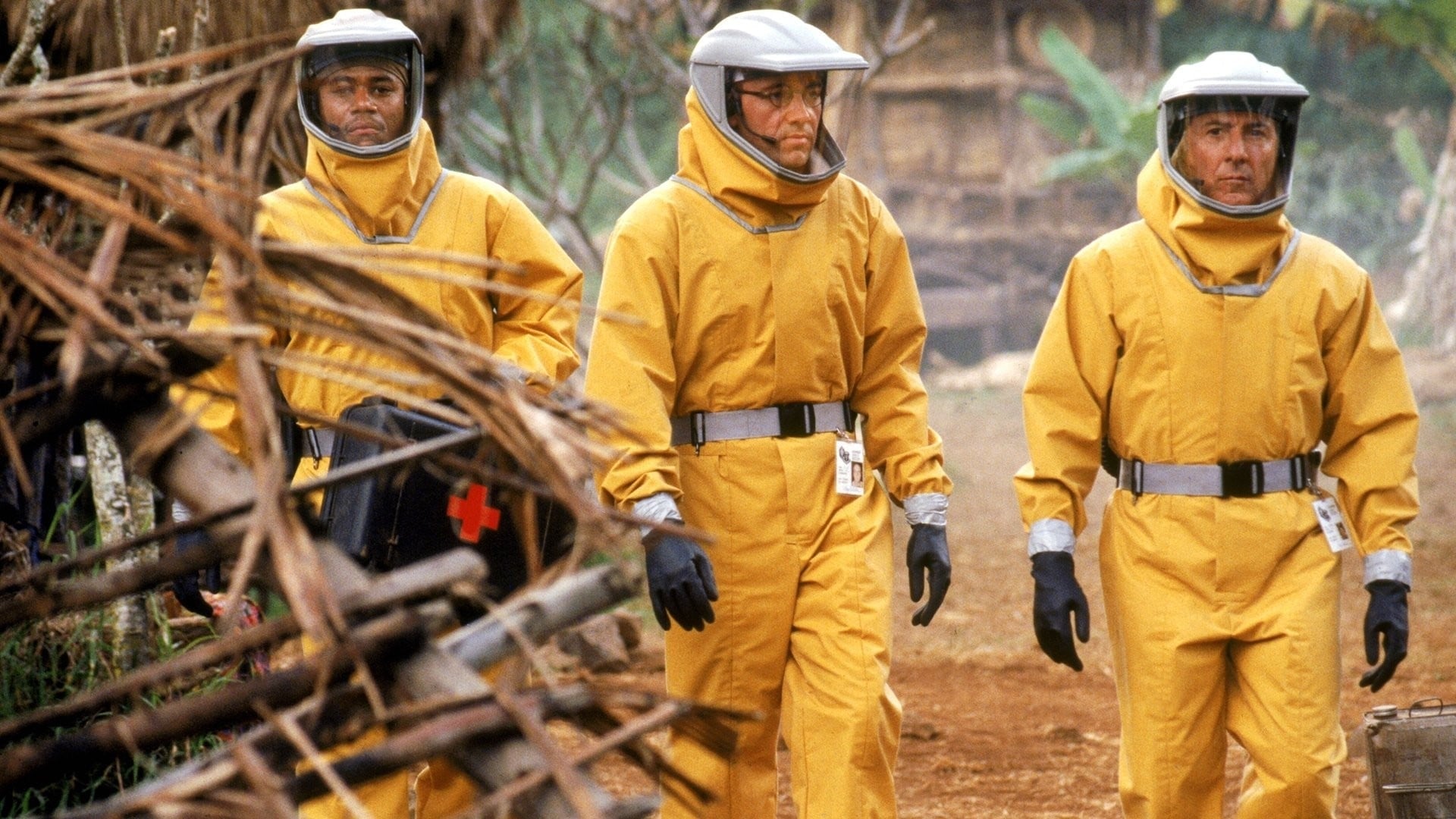 In light of the ongoing global pandemic, the likes of which the (post)modern world has never seen, I, like many other viewers, have also begun to watch movies and TV shows with similar subject matter. There are a couple of titles that tend to top most lists of pandemic-relevant films, and since I’d just happened to watch Contagion a short while before all of this craziness started in earnest, I found myself stuck with sitting down to watch Outbreak, a staple of schlocky ’90s blockbusters. Despite living through those turbulent times and thriving on a steady diet of cinema from that decade, I had somehow never actually watched this sucker before. It did, of course, garner a certain reputation, and I had often seen compared with Contagion, and not favourably.

Unfortunately, that reputation and those comparisons turned out to be true. Outbreak is bloated and unrefined in all of the ways that Contagion is focused and polished. If Contagion is the valedictorian turned brain surgeon of the family, then Outbreak is the sibling still sleeping on their parents’ couch waiting for his career as a YouTube star / extreme sports athlete to take off. I was kind of bummed, because I’m generally a fan of Wolfgang Petersen’s films and name. You can’t go wrong with top-tier Petersen, like Das Boot, Troy, Air Force One, or… The Neverending Story? OK, you definitely can’t go wrong there. I even have a particular soft spot for Enemy Mine, which while arguably not top-tier, is still some pretty great ’80s fare. I felt like Outbreak kind of got a little out of hand, though. I just imagine the writers sitting in the writer’s room having written themselves into a narrative corner, then suddenly looking up at each other at the exact same moment in a state of sheer revelatory ecstasy, and shouting “Helicopter chase!” in feverish unison.

To be fair to Outbreak, this movie obviously wasn’t supposed to be some intellectual treatise on the subtleties of human existence. This was clearly meant to be the cinematic equivalent of a shot of adrenaline straight to the heart. And I guess in that respect, it somewhat succeeded, as I was engaged enough to wonder how Colonel Sam Daniels (Dustin Hoffman), a virologist with the US military (the United States Army Medical Research Institute of Infectious Diseases (USAMRIID) if you want to get really technical (and verbose) about it), and his sidekick Major Salt (Cuba Gooding Jr.) were going to get out of the next scrape. As it turns out, a lot of the time, it was with another helicopter chase. I must confess that when I first sat down to watch a movie about the outbreak of a deadly virus in small-town USA, I hadn’t anticipated so much hot helicopter-on-helicopter action. But then again, maybe that’s why I’m not a big time Hollywood filmmaker. Not enough helicopters in my scripts.

The core of the conflict in the film comes down to the military control and use of biological weapons, a topic on which Outbreak does come out on the right side of with a clear “BIOWEAPONS BAD!” message that they might as well have just flashed on the screen in bright, neon lettering during the movie’s climax. But Outbreak doesn’t have time for things like subtlety or clear character development or remotely believable science; all that matters is the action. There is nothing in Outbreak that the filmmakers didn’t willing sacrifice upon the Alter of Pure Action, and the resulting conflagration does indeed burn brightly, though the flame seems to be completely extinguished by the time the credits roll.

The thing is well-acted: Along with Hoffman and Gooding Jr., you have a veritable who’s who of Hollywood, with Rene Russo, Morgan Freeman, Donald Sutherland, and the actor formally known as Kevin Spacey, and even an appearance my McDreamy himself, Patrick Dempsey. But Outbreak burns out so quickly for the same reason that real fires do; it’s given neither the time nor the space to properly breath. The movie brings up some compelling moral arguments that it could have used to anchor the action and elevate the proceedings. There’s the morality of whether the risk of an accidental outbreak or an intentional weaponization is worth the scientific gains from studying highly deadly and contagious diseases or whether eradication is the moral imperative. There’s the tension between civilian and military operating procedures and the best way to apply each to an emergency situation. Then there’s the question of whether it would be right to sacrifice the lives of a couple thousand people to save the lives of millions or even billions, otherwise known as the Needs of the Many conundrum (which you can explore on TV Tropes if you have an afternoon to kill).

The frustrating part is that Outbreak kept flirting with that last one, as it introduces the military protocol code-named Operation Clean Sweep, which involves dropping a nuke on the infected town (where the titular outbreak has, miraculously, been contained) to eradicate the disease and stop the spread of a virus with an apparent one hundred percent mortality rate. But alas, even with all of that flirtation, Outbreak never ends up scoring a date. Instead of a serious examination of the moral ramifications of an apparently justifiable (if simultaneously abhorrent) answer to the trolley problem (full disclosure: I just finished binge-watching the first three seasons of The Good Place and was kind of looking for a way to fit this in somewhere, and it happened surprisingly naturally.), that whole question is kind of glossed over and forgotten in favour of more helicopter chases. Petersen could have had his cake and eaten it too if he had focused on on this specific moral issue, or any of the others I mentioned. In the case of killing a few to save a lot, there’s a last minute diversion of the bomber carrying the nuke predicated on the complete and utter lack of military discipline this movie seems to relish in, but which rings ultimately hollow because it felt like the only reason the pilots decided to divert and “accidentally” drop the nuke over the ocean and spare the town was because the script needed for that to happen. The two pilots even smile as they do this, completely sucking any tension from the scene, as they don’t seem to grasp the full scope of the decision they’re making (not to mention the massive levels of radiation that will undoubtedly poison the entire coastline for decades, but that’s well beyond the scope of this film). And how is “victory” achieved? How else? Why, a helicopter chase, of course! What? Did you skip that part of your script-writing class?

Maybe part of the problem with watching Outbreak years after the fact, and particularly in the midst of the current COVID-19 global pandemic, is that so much of the movie rings untrue. The timeline of Outbreak seems so compressed now, to cartoonish levels. Colonel Daniels and his team are able to analyze and pinpoint the virus in something like a week, they develop a vaccine within the space of an afternoon, and manufacture enough to save an entire town of thousands from the back of the military equivalent of a mobile home in a couple of hours. Even before the real world found itself in the middle of an actual global outbreak, I think the timeline seemed a little absurd. Now that it’s fairly common knowledge that even in a best case scenario it takes at least between a year to eighteen months to develop a vaccine to a hitherto unknown virus from scratch, Outbreak seems like it was mocking the entire concept of vaccines by how trivial it seemed to create one in response to what would most certainly be considered the most deadly disease if it existed in the real world – and by a wide margin. COVID-19, depending on sources, has an average mortality rate of about 2.5%, and that’s a huge cause for concern, and is essentially grinding our planet to a halt as it overloads our current level of medical infrastructure. The virus in Outbreak apparently has a 100% mortality rate, which even in 1995 must have seemed a bit ridiculous, now just seems absolutely ludicrous, like predictions from the 1960s about colonies on the moon by the year 1999.

That’s the thing with Outbreak, though: everything is dialed up to eleven, and then boarded swiftly onto a helicopter for yet another chase. I would say that Outbreak is pure action, but that’s not the case. If you want a pure adrenaline rush with a ’90s flavour and some real meat on its bones, then what you’re looking for is Speed or The Rock or Armageddon or Terminator 2 or The Matrix. Any of these would make a fine main course; the best that Outbreak could hope for is to serve as an appetizer in preparation for the truly great action movies of that era. Outbreak is entertaining for what it is: a middling action-thriller that would have been a direct-to-video release had it not had the benefit of the A-list cast involved. It does, however, serve as a great public service announcement: Remember that if you’re ever in a difficult situation, your back is against the wall, and the chips are down, there is no problem so insurmountable that it can’t be overcome by a simple, high-stakes helicopter chase.