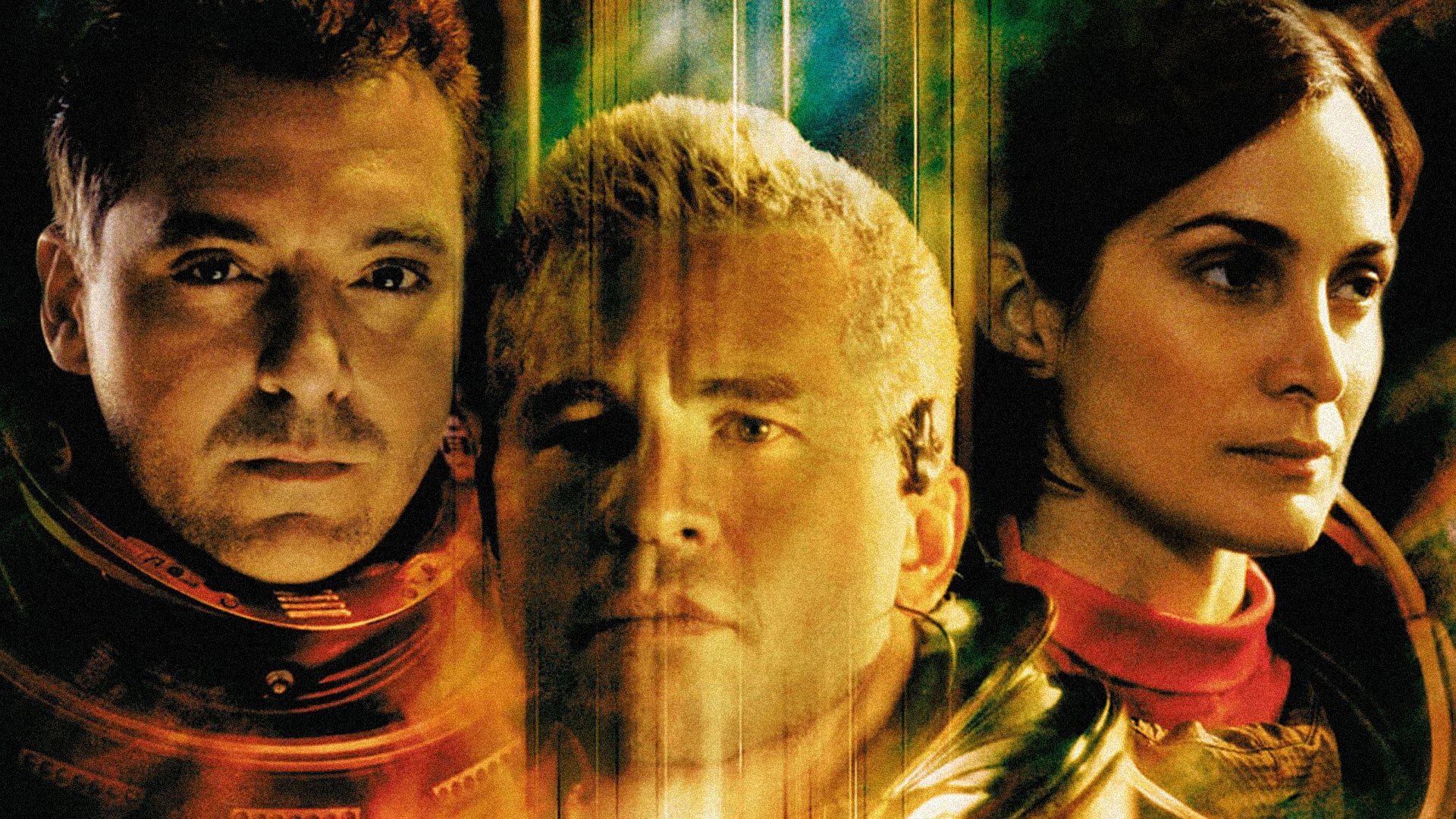 If you had to choose a movie to aggressively push out the door from the party that was the 1990’s, then I guess it would have to be Antony Hoffman’s Red Planet, starring Carrie-Anne Moss, Tom Sizemore and Val Kilmer in a perilously blundered trip to Mars. With this much nineties star power fueling the trip, I could see myself and friends eagerly going to see this on a crisp November evening, expecting high stakes sci-fi adventure, featuring the latest special effects and near-future fantasy of humanity’s quest to step foot on our planetary neighbour. Indeed, the poster hints at a silhouetted menace awaiting our crew, as our fearless Kilmer drags his crewmate across the arid landscape toward a multi-legged monster, all drenched in blood red, speaks volumes for intriguing poster design and an action packed thriller at hand.

Just as quickly as I can envision us heading into that theatre, I can imagine the group of us solemnly leaving the multiplex with, scratching our heads, while somebody said “at least we got to see Carrie-Anne Moss topless” while the rest nodded slowly in agreement, still in shock at the misfire of a film we just took in. Indeed, it’s pretty easy to take Red Planet apart. From the beginning moments of Moss’ narrative where her character gives a brief bio of the assembled crew, including such scathing hot takes including: “a hot head, but a fine copilot,” “soul of the crew” and “world’s greatest bioengineer, his own greatest hero”, our expectations for the film are immediately lowered for the remaining 100 minutes. Red Planet immediately tells us the type of film it’s going to be by telling us who everyone is instead of showing us and right after this narration, reaffirms that you won’t be caring about any of these people when they start acting like rude creeps. I was thinking maybe this was the backup crew but nobody told them this before taking off.

Instead of presenting us with Earth’s first manned mission to Mars as a truly noble, heroic thing to do, we’re under the impression that this future earth (approximately 2055) is composed of a regressed society of sexist, maniacal and selfish folk. To make matters worst, this crew bring along a robotic helper with an artificial intelligence programming that includes a war-games fueled military mode, which is revealed pretty early on and concretes to the viewer that this is how our “heroes” will meet their demise, thereby crushing any dream of seeing a funky Mars monster. Indeed, humans are our own worst enemy and just like that, Red Planet is a relatively predictable, mundane adventure that offers nothing of significance to hold onto.

It’s made all the worst for myself, since I watched Brian de Palma’s Mission to Mars just a few days previous. While Mission isn’t anywhere near de Palma’s best work, it’s still a solid outer space adventure that gives us so much more to chew on in a similar runtime as Red Planet, including characters who we get to learn about organically, and some actual decent science that would seem to give inspiration to The Martian nearly two decades later. Red Planet, in that company, is a bit of an embarrassment, but let’s give it some credit: there are some fun moments, the characters are entertaining in being over the top and the special effects are ambitious. Indeed, I can see some passion come through on the screen here from the filmmakers, and maybe with an improved script and larger budget, this would have been a more memorable film. As it stands though, you should just go watch Mission to Mars instead.