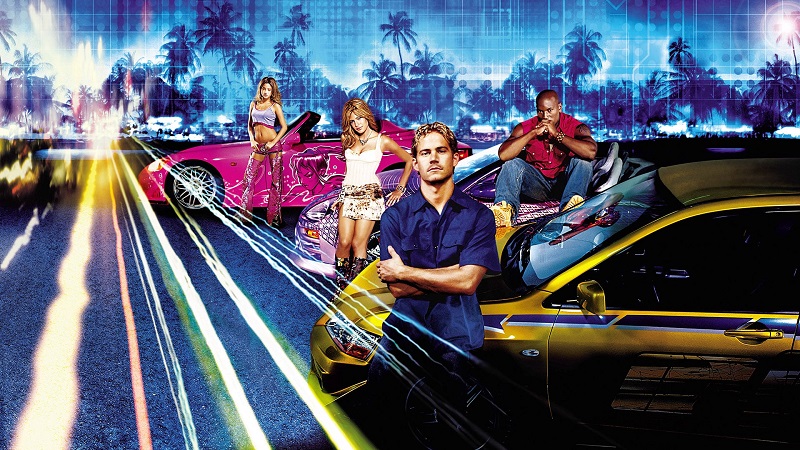 What 2 Fast 2 Furious lacks in story, plot, and character, it nearly makes up for with swagger. 2 Fast 2 Furious marks the low point in The Fast and the Furious saga, which isn’t to say that it’s not without its certain charm. It’s a fun ride, even if it doesn’t nearly reach the heights of the first movie, and it doesn’t quite fit with the later evolution of the series when it truly came into its own as an ongoing story of mercenary spies / borderline superheroes on globe-trotting adventures to save the world and protect their “family.” 2 Fast 2 Furious does, however, add several important elements to The Fast and the Furious lore, including Tyrese Gibson as Roman Pearce and Chris “Ludacris” Bridges as Tej, who would become series regulars, and Eva Mendes as Agent Monica Fuentes, who would also show up for a cameo in a later entry. There’s just a hint of some of the technological ridiculousness that would be fully embraced by later movies in the franchise with the “electric darts” the police use to disable the electronics of speeding vehicles. (Or maybe this is real tech, and I’m neither fast nor furious enough to have ever been worth the effort from local law enforcement.) 2 Fast 2 Furious also began the grand tradition of increasingly confusing and nonsensical titles for movies in the series. Though I suppose, at least, nobody could accuse them of being boring.

Also of note, 2 Fast 2 Furious is the only one of The Fast and the Furious films not to feature Vin Diesel in his iconic role as Domenic Toretto. He has appeared in every other movie in the main series, even if just squeaking in a cameo for the third entry in the series, The Fast and The Furious: Tokyo Drift, which was a fortuitous bargain for Riddick fans, as it allowed Diesel to secure the rights to the Riddick character and franchise paving the way for the eventual production of the third film in that series, Riddick, released in 2013.

The why of Diesel missing the chance to take up the mantle of perhaps his most iconic character in a franchise he obviously loves so much is also a part of the lore of the series. Most likely, it was matter of scheduling, with XxX and Chronicles of Riddick making it difficult to squeeze in 2 Fast 2 Furious. One can’t help but wonder at the alternate timeline that would have seen Paul Walker and Vin Diesel reunited in 2 Fast 2 Furious instead of in the fourth entry in the series, Fast & Furious. Would the series have been as successful – or even have existed at all – had it not taken this unforeseen turn, opting for a pitstop in Florida, before going off to Japan to find itself and eventually coming back home to settle down? While it’s always fun to speculate about such things, at a high level, I think we can make some reasonable predictions. If Vin Diesel had returned, it’s likely that the narrative of the second film wouldn’t have included Ludacris as Tej and almost certainly wouldn’t have welcomed Tyrese Gibson into The Fast and the Furious family. The genesis of his character, Roman Pearce, can largely be read almost directly as the result of Diesel’s absence. Without Domenic Toretto, the writers were forced to create a co-lead for the movie, a character with a criminal history, a proficiency for driving cars, and a personal connection to Brian O’Connor, providing a foil to Paul Walker’s O’Connor using a proven formula. Even visually, Roman Pearce evokes Domenic Toretto: bald and muscle-bound, with little use for sleeves. Throw in the fact that he’s a hothead with a propensity for violence and a mistrust for authority figures, specifically law enforcement, and you can almost picture some writer hitting Ctrl+F for “Domenic Toretto” in the script and selecting “Replace All” with Roman Pearce, then furiously scrubbing bits of incriminating dialogue and character beats while glancing nervously at the clock upon news that Vin Diesel would not, in fact, be returning for the sequel.

I don’t know if I’d want to live in that universe, though. The meandering path that The Fast and the Furious series took to evolve into what it is now is part of the charm of the series. In a way, 2 Fast 2 Furious was an unwitting pioneer in the concept of shared cinematic universes, serving as the introduction to characters who would later appear in the subsequent team-up films, with a built-in background already established in those earlier, standalone movies.

While 2 Fast 2 Furious may not have Vin Diesel, it does, however, have one of the other key ingredients that contributed to the success of the series: namely Paul Walker. In this second installment, Walker reprises his role as Brian O’Connor who, having let the criminal Domenic Toretto escape at the end of The Fast and the Furious, is now on the run from the law, having relocated from Los Angeles to Miami to escape the potential legal ramifications of his actions. The movie stays close to the roots of the series here, with O’Connor eking out a living in the underground racing scene in Florida. His continued involvement in illegal racing somewhat unsurprisingly draws the attention of the FBI, who need his help busting a big-time drug kingpin Carter Verone (Cole Hauser). For some reason, Verone is looking for a pair of drivers to help him in a convoluted scheme to avoid capture with his precious, precious cash after smuggling just a tonne of cocaine into the continental US. Luckily, Agent Monica Fuentes is already uncover in Verone’s inner circle, and is able to get Brian and his childhood friend, Roman Pearce, an “interview” for the job, which mostly involves recklessly endangering people’s lives on the nearest highway. Why Roman Pearce? Well, why not? He’s apparently the only driver good enough to keep up with Brian’s sweet racing skills. Eventually Brian and Roman earn Verone’s trust, but things aren’t always as they seem as the drug kingpin and the FBI both seem intent on ruining what would otherwise be an average delivery of millions of dollars of untraceable drug money to a private jet at a nondescript airport in Florida bound for parts unknown.

For those of you keeping score at home, I made the bold move of going on record comparing The Fast and the Furious to Shakespeare. I make no attempt at such claims about 2 Fast 2 Furious. Look, this movie is probably not going to change your world. On the other hand, does it check all of the boxes for a fun, calorie-free action flick? Absolutely. If you’re looking for a fun way to spend an hour and forty-seven minutes, look no further. If you’re looking for genre-defining action/adventure movies with action set pieces that push the boundaries of special effects and the laws of physics, then you’re probably looking for other entries in the series.

Still, 2 Fast 2 Furious is, without a doubt, a Fast and the Furious movie. High-stakes car chases that involve a reckless disregard for the drivers’ own safety and the safety of others? Check. Protagonists in over their heads with a criminal mastermind? Check. Good-looking (and sometimes scantily clad) young men and women engaging in antics that may or may not be directly related to the plot? Check. Finding reasons for fast cars to be able to solve important plot points? Check. Wisely, director John Singleton keep reminding the audience about the much better first movie, but only just enough that it doesn’t draw too much comparison and analysis. In addition to referencing the events of the first film, Thom Barry also returns as Agent Bilkins, providing a little more connective tissue between the two movies.

Smartly, 2 Fast 2 Furious wasn’t just a complete regurgitation of the first movie, and this works largely in its favour. This movie definitely has its own tone (for better or worse). In addition to the characters of Roman Pearce and Tej, 2 Fast 2 Furious contributed some more key ingredients to The Fast and the Furious recipe. This was the first of the movies in the series to introduce the plotline of a law enforcement agency engaging the protagonists of the series to complete a job that required their very particular set of skills, namely driving cars, blowing things up, and drinking Corona. This hero-for-hire trope would, in fact, return to fuel several more entries in The Fast and the Furious saga. Also, while the first film included more main characters that were non-white, 2 Fast 2 Furious really began cementing The Fast and the Furious movies as a series that fully embraced a diverse, multicultural team of protagonists, also proving along the way that one could be both inclusive and profitable.

Despite lacking the seemingly effortless charm of the first film (the kind of effortlessness that we all know actually requires incredible levels of effort), 2 Fast 2 Furious carved out its own path by doubling down on the action. With set pieces that were already stretching believability, but that are so darn fun and just teetering ever-so-slightly on the edge of the possible, it’s nearly impossible to sit through this movie without grinning to yourself. From the opening street race where, apropos of nothing, Tej and his crew raise a bridge causing Brian and the other racers to have to use the inclined section of roadway to jump the newly formed chasm to avoid almost certain death through to the final stunt of jumping a speeding car off of a ramp and crashing it into a speeding boat to stop the bad guys and rescue Agent Fuentes, the movie leans hard into the spectacle of the whole thing, which is really its strongest suit. There’s also a high-stakes street race that comes down to a game of chicken and a mad scramble of a couple of hundred cars as part of Brian and Roman’s plot to outsmart both Verone and the police. Or perhaps I should say out-maneuver, as I don’t feel comfortable certifying the intelligence level of any of the actual plot points.

But 2 Fast 2 Furious isn’t concerned with winning over the rational part of your brain: it’s gunning straight for the most primitive parts of your grey matter with a straight shot of adrenaline. That is the only hope it has, and it mostly succeeds. Perhaps the best that can be said of 2 Fast 2 Furious is that it makes no claims to be other than what it is: a shiny distraction in the traffic jam of life.