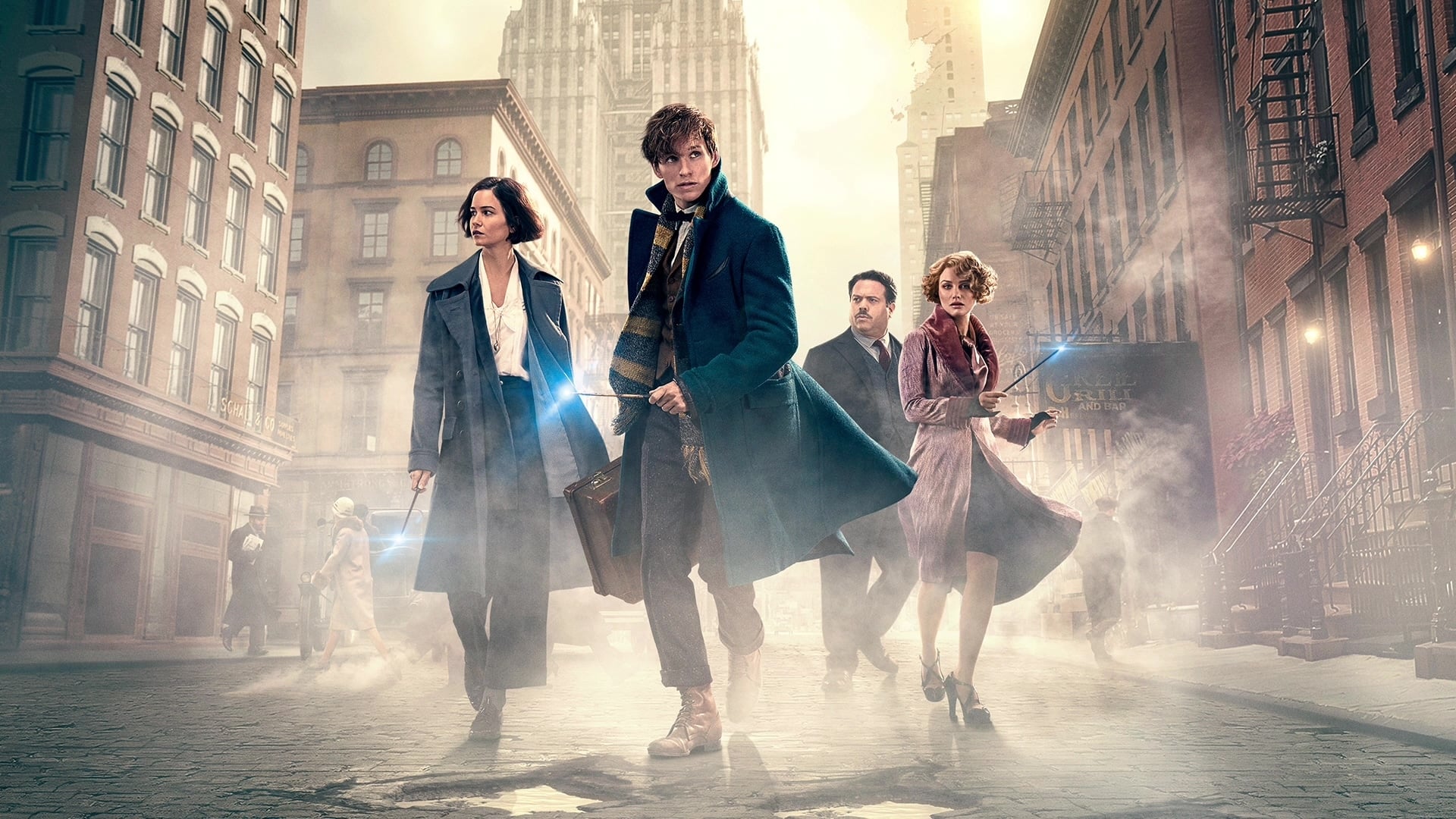 It’s entirely possible that I don’t really understand Fantastic Beasts and Where to Find Them. Upon seeing the movie in theatres a few short years ago, I felt indifference. Sure, there were beasts. Yes, they appeared fantastic. But I didn’t really understand why we were focusing on them so much, in a film where the plot didn’t seem to necessarily revolve around them. Knowing that this was the first in an ambitious series of movies set in the Harry Potter Wizarding World, I could chalk up my confusion to a few things:

We meet Newt and his friends, as well as enemies and locations and I would think, most importantly, we meet all these beasts. When we jump into Newt’s infinite bag of tricks, we’re seeing some pretty bewildering creatures doing their thing, and I have to assume that those creatures, with their abilities and quirks, will play into the plot either later in this movie (preferable) or perhaps later, already planned sequels.

Are there even Fantastic Beasts books? A published screenplay, perhaps, but I tapped out of reading Rowling’s wizard books after Chamber of Secrets, electing to focus on the movies. Fantastic Beasts made me feel like I was missing out on the minutia of the books as many characters I’m seeing teleport around on screen were probably referenced to some degree in other media. But doubly so for all the beasts. I’m in awe of a creature but an elaborate, lengthy chase scene had me puzzling over how this advances the plot along, and I attribue it at the time to: “this creature is probably something the fans have been waiting to see for a while, so let’s give them some wonder.” I did not receive that wonder.

Perhaps the most explanatory of the bunch on why this movie was confusing, is because there was very little plot. Near the end of the movie I’ve already figured it out: there is no compelling story here and we’re just jumping between locations to allow the viewer to feast their eyes on complex CGI effects. It’s kind of like an action film with great spectacle, but replace the generic action scenes for generic animal chase scenes. I can understand why Newt needs to control his animals, like you would any other pet or creature you care for, but I can’t understand why the gold-pinching platypus beast plays into the origin of an orphaned wizard.

I’m missing a lot, of course, and if you’re familiar with the movie you probably wrote this article off already.  I don’t blame you. I will often revisit many of the films I see in the theatre when they are released for home consumption, but I couldn’t find a good reason to re-watch Fantastic Beasts. It was truly missing the magic of the Harry Potter series, and there’s a multitude of reasons why that is. At the time, I gave it two and a half stars, and promptly moved onto The Next Big Film.

Fast forward a couple of years and the inevitable sequel was upon us; something weird happened though: I didn’t go to the theatre to see it. I don’t often read reviews in full before seeing a movie, nor give the Rotten Tomatoes score much control over my theatre going decisions, but rely more upon the general feeling I get for media, which is properly constructed of reading headlines, having conversations with friends, seeing who is attached to the film and allowing pop-culture noise to seep into my subconscious. The resulting compound will generally dictate how excited I am for an upcoming release. And I have to say, that excitement did not kick in for The Crimes of Grindelwald and I skipped it in the theatre.

Missing it always kind of bothered me though: this would be the first Wizarding World movie I missed in the theatre. A tad disappointed, I did make an effort to watch it as soon as I could when it hit home video.

It wasn’t awful, ok? But it didn’t have the luxury to be as bad as it is, which is where some confusion may set in. There were a lot of problems with the film, including many that I’m willing to overlook. After all, I do have a tendency to appreciate a movie, regardless of quality, for what it is. I’ll look for the charm, keep an eye out for the ambition, and give a shout out to a particularly well done portion. The Crimes of Grindelwald falls flat on most of these.

First, the objective good: the movie has great effects. If for nothing else, the visuals will certainly entertain and I believe we have a team of professionals led by the director David Yates to thank for this. Seeing the film at home, in 4K quality with HDR in full spectrum, had me awe numerous times. The “finale” with the blue flames lit up my living room and my heart, as I realize how easy it is to become lost in special effects and take them for granted.

The beasts themselves – because yes, there were a few – also look great. Many of the set pieces and locales are marvelous to look at. The actors do a decent job but – here as we slide into the negative – I feel as though they do the best with what they’re given.

Nothing in particular really engaged me, but at the core of my frustrations is how lost these characters felt as they swam through someone else’s story. With Grindelwald given title treatment, it stands to reason that there should have been a lot more of him in the film. Instead, he simply shows up for brief periods of time to advance the plot along (and arguably doesn’t even do so until the finale). We have beloved characters show up from the first movie with literally, absolutely nothing to do. Rowling seems to have jammed these characters back into the script because they’re available. And some of their actions are completely baffling; at the very least, the movie doesn’t convey to this particular viewer proper reasons for why things went down the way they did. It’s possible that there is more to the original screenplay or perhaps some extra footage on the cutting room floor. With that said, I doubt adding another half hour to this already lengthy film will turn it into any kind of coherent piece of work.

Our protagonist seems lost as well; in the first film we were at least treated to his motivations, wherein Grindelwald he seems to be a bit of a pawn to other characters, as though he’s just a powerful (?) wizard who has a place in this grand tale manipulated by the greater powers that already know the outcome. Would it have been awful to just move onto another character? Don’t get me wrong: I really like Newt as a character; he just doesn’t seem to fit in this part of the story. If I have to draw the comparison I will: You could argue that the Harry Potter series follows a similar formula, where Voldemort is slowly rising to dangerous power, just as Grindelwald is slowly rising to power. In the Potter series, we have Harry, inextricably tied to Voldemort from the very beginning (literally since Harry was a baby). That same bond does not exist here between Newt and Grindelwald; in fact, they seem nary aware of one another and their own individual stories do not seem connected.

Again, I could be wrong: I’m watching these without a ton of context, aside from the movies themselves.

In the end, I figured it out as I watched these flashback scenes in Grindelwald that involved a young Leta Lestrange and Scamander: Rowling writes children much better than she does adults. The flashback scenes at Hogwarts resonated the most soundly with me, and it’s not for nostalgia: it’s because the story is actually interesting. I quickly churned about my brain to come up with a better sequel to Fantastic Beasts: one in which the film takes place back in time and get a bit of origin on not only Newt, but his connection to Leta, her story and a young Dumbledore’s relationship with Grindelwald, all of which hinted heavily at in the existing movie. Of course, it always seems easier to conjecture at what the filmmakers should have done after the fact in a few sentences; it’s sometime I’m sure we’re all guilty of, but it does bring forward the notion of disappointment. We don’t necessarily deserver or get the best, but we shouldn’t have to be so disappointed.

That’s Grindelwald’s greatest crime, really: being a middling entry in a behemoth of a franchise that has legions of fans and massive expectations. I hope that we can look back after a few more (better) entries and brush this off as a minor mis-step. After all, we’ll keep watching.