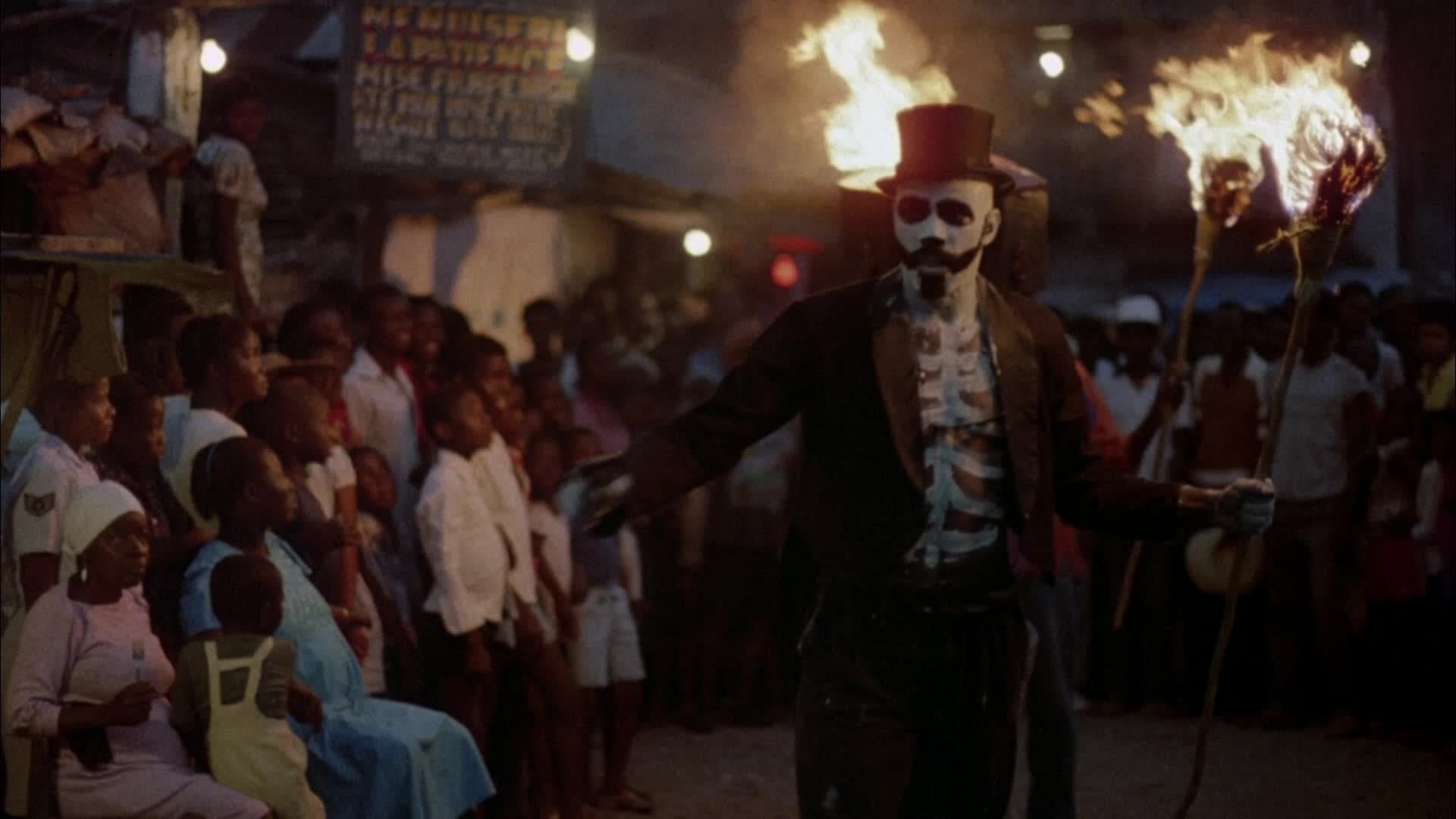 As I sit here on my couch and look over to see one of my cats sitting on the stove, I can’t help but be reminded of watching The Serpent and the Rainbow in early September at my friend Cale’s place. Now, the connection between a cat and this movie is entirely outrageous, and dubious at the very least. But it’s there in this question: is this just fantasy, or is this reality? My cat doesn’t typically go on the counter (this one, at least) so it’s always a bit of a surprise to see her up there. She goes up there in secret, and when I see her, our eyes connect and the stare down begins. I never win.

And I’m not sure who wins after watching The Serpent. This is a trippy movie that really plays to your questioning of reality: how much of this stuff is going on? And it plays to your willingness to suspend belief. When I search for the movie on IMDb, it’s classified as fantasy, but I’m not so certain.  I want to believe.

In the legends of voodoo the Serpent is a symbol of Earth. The Rainbow is a symbol of Heaven. Between the two, all creatures must live and die. But because he has a soul Man can be trapped in a terrible place Where death is only the beginning.

Cale was really pumped to find out I hadn’t seen this film; his excitement was a bit bewildering. Why would I have seen a 1988 fantasy/horror movie starring Bill Pullman? Indeed: I had never known it existed. He insisted the possibility lies in the director: Wes Craven. Yes, the same master of horror that brought us Freddy and his hijinks and single-handedly “re-launched” horror in the late nineties with the release of Scream had also dabbled in a film about black magic and voodoo. The movie is based on a book which in turn is based on some real events, where somebody has concocted a drug that can bring the dead to life again; even if that life is a bit zombie-like.

Bill Pullman’s character is essentially working for big pharma, who want to investigate the drug’s usage for medical purposes (and presumably Big Evil, although they never need to fully go into that). Armed with a healthy dose of cynicism, Dennis (played by Pullman) goes to Haiti and is quickly consumed by the netherworld associated with black magic. We essentially have two cultures working against Dennis: Haitian and magic. He’s discovering and slowly unraveling a conspiracy: local police are trying to deter him to leave the country, and his life seems to be in peril as he gets closer to this magic powder.

Then you start questioning some things. He’s blasted in the face a couple of times throughout the film with another magic drug, where he becomes disoriented and hallucinates. As we get further, we can’t ben certain that what he’s experiencing has been real: as the viewer, we watch those scenes where he wakes up the next day, recovered from a killer hangover, but we begin to realize that those effects may not have gone away entirely. His tenacity to stay and investigate is bothersome, but he’s driven to push forward in a quest to help the local people from this black magic that is corrupting their world.

Indeed, the drug has been used on a couple of people, and part of his journey is to find, literally, the walking dead. Although this movie could be considered part of the genre, this is unlike any other zombie film you’ve seen. Craven’s insistence on staying so grounded allows us to believe these zombies are real: this guy was buried alive, then arose from his grave to live again. But he’s not quite all there; no, we don’t have zombies running around trying to eat people. We have zombies who go back to their families, and when they aren’t quite right, you realize how much damage was and continues to be done. Imagine losing a loved one, then have them back, but they are distant and off. It’s not something that’s unbelievable, if anything, that’s something that happens frequently (except for perhaps the actual dying aspect). You’re not watching fantasy here; the horror is real and it’s out there.

The climactic ending was absolutely surreal and exciting; I was at the edge of my seat and fully invested in our protagonist and his journey. Going in blind was a fantastic experience; if anything, knowing that it was Craven put a certain expectation of jump scares and gore. Craven is instead quite reserved, with a focus on suspense, and letting the horror of this world slowly set in. It’s quite effective, and deserving of its place among any horror movie marathon.

The I-Want-To-Believer in me was halfway convinced that this black magic is real; I was convinced that what I saw was akin to a documentary and that Dennis Alan in the movie closely represents what really went on. It was, after all, presented in such a way that you could chalk up the events depicted on screen as hallucinations or exaggerations from the perspective of our protagonist. But no, it’s not to be. In the end credits, the film is upfront with honesty, stating that Dennis comes back with rare powders that are under “intensive study in the United States and Switzerland” and that everything else, including all characters and incidents, are entirely fictitious. I get it; most “inspired by” or “based on” movies are like this. That The Serpent and the Rainbow is so upfront with it is nearly refreshing, and in the end, didn’t take away from my overall enjoyment of the film. Although, thinking back to THAT scene, still makes me really uncomfortable. When you see it, you’ll know.